I was editing a blog post.  EB peered over my shoulder.  “Why don’t you ever write about me?” she asked. “I do“, I said. Still, on reflection, her’s is a bit-part in this blog and yet having a sister with Rett syndrome has had a profound impact on her childhood too.  We are very conscious of this and try our best to make sure that F and EB don’t feel like they only have a bit-part in our lives.  Even so, I have missed countless school assemblies because I have had to be elsewhere and EB has missed parties and play dates.  When they complain about this (and they do so only rarely – in fact, F almost never does), their complaints are never directed at R.  I had been thinking about all of this when events unfortunately contrived to provide me with a new example.

F and EB had a gymnastics competition at the weekend.  It was their first competition of the season and they were both excited.  They are working with new partners and have new routines.  EB, has a new, very sparkly, pink leotard (R greatly approves).  So, all in all, exactly the sort of event that I really wanted and needed to attend.

As we were preparing to leave for the competition on Sunday morning, R became unwell. She was keen to go, though, so we went. But she became more and more poorly.  Shortly after arriving at the venue, we decided we would have to take her home.  F and EB would stay and compete. We would try to return in time for the afternoon session. They took this news well.  They are pragmatic and anyway this is part of the landscape of their lives.

R didn’t have a good day.  A few hours later, we found ourselves, once again, at the emergency department.  G left us at the hospital and headed back to the competition.  He missed their afternoon routine.  F and EB didn’t complain. And while no doubt this was partly because they had both won a medal, I am sure that it was also partly because they understand that sometimes R really does need to take centre stage. 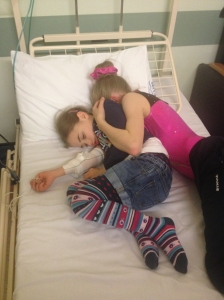 This isn’t quite the post that I thought I would write.  We’ve just been allocated a budget to pay for some personal care and respite (only 3 months short of 5 years from our initial referral for this.) Self directed support is the new way of providing social care in Scotland.  The idea is that carers have control of a budget, allowing a bespoke care package to be set up that is tailored to an individual’s needs.  Previously, councils would either provide the care directly or set up contracts with agencies to do this on their behalf. There are clear advantages to this approach, not least the ability to specify exactly what you want, who you want and (within reason) when you want it.

This kind of flexibility is not usually a feature of council services.  For example, our local council runs a holiday programme for children with additional support needs. R’s usual allocation is 2 days in April and October and 4 in the summer. These days are allocated at the convenience of the council. If you don’t need a day – perhaps because of a family holiday – then the allocation is lost.  The days are not allocated until about a week before the school holidays start, making forward planning very difficult. My usual work days are Monday, Tuesday and Thursday, so, of course, for the holiday last week, R was given Friday. I dropped R off at 9. At 10, they called to say that there was no nurse on duty due to a staffing issue and, as R had had a seizure, I would need to collect her.

Trying to extract information from social work about how to organise and administer the care that we have funding for has been difficult.  The system is very new and no-one really seems to know how it works.  The council worker that came to speak to me told me that we must manage the budget in such a way that sufficient funds will accrue in the account to pay for employer’s insurance, payroll services and so on in the second year.  She then said that any funds in the account that had not been used by the year end (in March) would be clawed back. I pointed out that if they did do that, I would be unable to save any money in the account until after March. She looked confused and changed the subject.

On Monday I contacted a very well regarded local organisation about providing care for R.  Unlike many health and care workers we have encountered, the woman that I spoke to showed empathy as I described our circumstances. (Professionalism is apparently incompatible with demonstrations of empathy. I find it strange that if, I, say, describe how R usually gets up for the day at 3am or even earlier, or that she blacks out and stops breathing, most professionals merely note this information without comment and move on. This is not normal and it’s not easy.  It’s ok to acknowledge this.)

We met today. I expected to be able to write about our new respite arrangements, however, the agency worker explained that as a consequence of the introduction of self directed support, her organisation has lost its contracts with the local councils.  The result is that they are able to employ far fewer staff than they have done in the past.  This means in turn that they are unable to provide care to many clients when they do request it.

We are making progress towards respite, which is good news, but even with a budget in place we have some way to go yet. 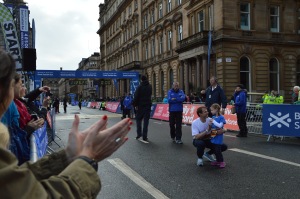 Take learning that R can spell the days of the week, for example.  R is 9. When F was 9, he read the Harry Potter series (but only because he was told that he was not getting to watch the movies until he did). The old me would have thought that I would be far prouder of F’s level of literacy than R’s.  But I’m not.  For a start, F was taught to read in school.  R has learned to read and spell without any formal instruction.  Most children in mainstream can be taught to read.  The success rate in special schools is far lower. All of this, in my book, makes R’s achievement something to be really proud of.

This weekend, a large group of family and friends took part in the Great Scottish Run to raise money for Reverse Rett.  F and EB both signed up to run in the children’s race.  I was proud of them both.

R was supposed to be taking part in the “Family Mile”.  The plan was for me to push her around the course in her buggy.  We were happy that R had even made it to the race, having had another emergency hospital admission at the start of the week.  R watched the other children in their run.  She watched them receive their medals.  There was no way that she was going to be persuaded use her buggy. So she walked. Her Dad carried her a bit and coaxed her a lot but she walked into George Square in Glasgow on his hand. R came last.  And I couldn’t be prouder. 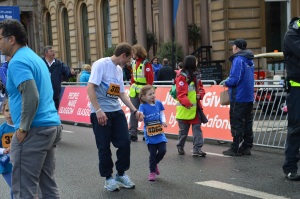